This article will show you how to convert and rip Blu-ray 3D to AVC/MVC MKV for playback with 3D effect preserving using MakeMKV.

3D technology changes people’s life and make it possible to have an immersed sense when watching 3D movies. Now, no need to go to the cinema, you can enjoy 3D movies at home with the help of portable devices or 3D player software. As the popularity of 3D Blu-ray movies, more and more problems about how to rip 3D Blu-ray arose. In this article, I will show you how to convert and rip Blu-ray 3D to AVC/MVC MKV for playback with 3D effect preserving using MakeMKV.

As you know, multimedia players that support the AVC/MVC (the codec used by Blu-ray 3D) have recently emerged as the Sidewinder Xtreamer or Mede8er of MED1000X3D. By testing these two very powerful players on 3D playback, I could make an interesting experience before me and I thank Basthi by the way.

First of all, download and install MakeMKV to your PC. The program is free and available for Windows and Mac users. With it, you can rip Blu-ray 3D directly in AVC/MVC 3D Framepacking (Top & Bottom) 1920 x 2160 pixels + the small band of 45 pixels between the two images placed above/below as you can see on the display. this video is multiplexed 3D MKV container. Here I’ll show you how to rip and store the contents of a 3D Blu-ray disc in an MKV in AVC/MVC 3D.

The handling is very simple, no need to soft decryption like AnyDVD HD, MakeMKV does everything alone, and automatically. Simply insert the Blu-ray 3D in your HTPC, launch MakeMKV. You then click on the icon “Blu-ray => HDD” MakeMKV and decrypt Blu-ray 3D to blast protection.

Then a small window will appear with several tracks to rip or not the Blu-ray 3D. Just select the ones you want to keep. Will be removed preferably all the trailers and clips, which are the smallest tracks (up to 5 GB), keeping only the main movie. Drop in the main movie, you can see that you can select an MVC box. By checking this box, MakeMKV will rip Blu-ray 3D MVC automatically AVC Top & Bottom (or framepacking) without loss. The video is not re-encoded and retains all the qualities offered by the Blu-ray 3D.

You can also select the audio tracks you want to keep (DTS or DTS-HD, Dolby Digital 5.1 or TrueHD) and subtitle tracks. For my part, so I keep the main movie + VF VO track or DTS-HD or TrueHD, + the forced subtitles or French. This allows for not too heavy MKV. Even with this shedding MKV, it will still be quite heavy with more than 30 GB as a reminder was still two video streams.

When you have selected the tracks of your choice, simply click on the 3D MKV MakeMKV and will be completed in about 1/2 hour to see a little more depending on the power of your PC. 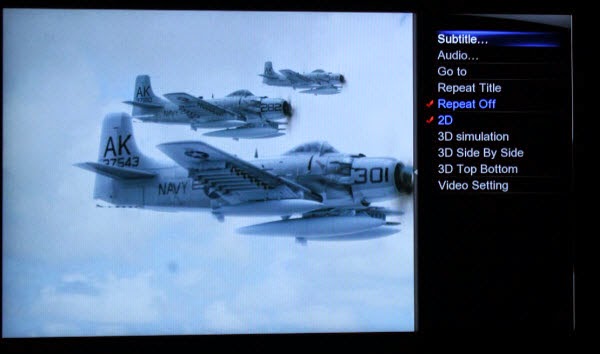 Regarding the reading of this 3D MKV MVC. The Mede8er MED1000X3D and Sidewinder 3, which use the same Realtek 1186 can read it perfectly, with support for subtitles in 3D. In fact, the video is played in 2D 1080p, and if you want to see in 3D, simply opt for the 3D Top & Bottom (Top/Bottom or) format, the player will switch to sequential display 3D 1080p. and I guarantee you that this is true 1080p 3D displays, excellent quality, such as the Blu-ray 3D home. This manipulation works even read Samba, or via USB without jerking. All 3D TV I tested worked perfectly and display video in 2D or 3D 1080p user choice.

The MediaInfo analysis of 3D Full HD 3D MKV file obtained gives it below. It is therefore a good MKV to AVC/MVC profile Stereo High@4.1 with two 1080p framepacking (top & Bottom) images and an average rate of 36.7 mb./S stereoscopic broadcast that remains content (Avatar can climb to more than 60 Mb/s).

* Program is time-limited — it will stop functioning after 60 days. You can always download the latest version from makemkv.com that will reset the expiration date.
* HD-DVD support is limited – some discs may fail to open and not all audio and subtitle tracks will be preserved.
* Blu-ray and DVD discs are fully supported.
* Computer administrator privileges are required on Windows to run the beta version. This is limitation of Windows SCSI application programming interface. Eventually MakeMKV will not require administrator privileges to run.
* Aside from restrictions above, the program is fully functional. Produced MKV files are not degraded in any way and have no time or usage restrictions.

Do you need something besides .mkv files? EaseFab Blu-ray Ripper is an alternative of MakeMKV. It is a open source Blu-ray & DVD baukuping/coping/ripping application to help you rip 3D Blu-ray to SBS MKV for watching on 3D players.

Launch the professional 3D Blu-ray to Gear VR converter. Click the button on top left corner to add 3D Blu-ray movie to it. Double click the video, you can preview the movie in the right side.

Click “Profile” and find “3D Video”. there are a lot of format options for you. To rip 3D Blu-ray to MKV SBS 3D, select MKV-3D as the output format.

Simply click the convert button under the preview window, and the Blu-ray ripper will start the conversion from 3D Blu-ray movies to SBS MKV.

After conversion, open output file destination, locate the created SBS 3D MKV video and you could watch it on your 3D player as you want.

How to Play Side-by-Side 3D video

When playing a Side-by-Side 3D video, a 3D PC or 3D TV will play the file with different 3D display technologies, mainly active shutter or polarization. That depends on your 3D hardware.

The visual effect of a Side-by-Side 3D videos is much better when compared to that of Anaglyph Red/Cyan 3D video (See the Difference Between SBS 3D, Anaglyph 3D and Top/Bottom 3D), but more specialized hardware is needed to play Side-by-Side 3D videos, including a 3D PC or 3D TV as well as a pair of assorted glasses. To learn more about it, please click http://www.best-3dtvs.com/what-is-side-by-side-3d/